-->
Home
GAMING
Review of "Ratchet & Clank: Through the Worlds". an old friend is better than two new ones

Review of "Ratchet & Clank: Through the Worlds". an old friend is better than two new ones

the sledgehammer of expectations inevitably falls on Ratchet & Clank: Through the Worlds - a bright, spectacular, incredibly exciting game 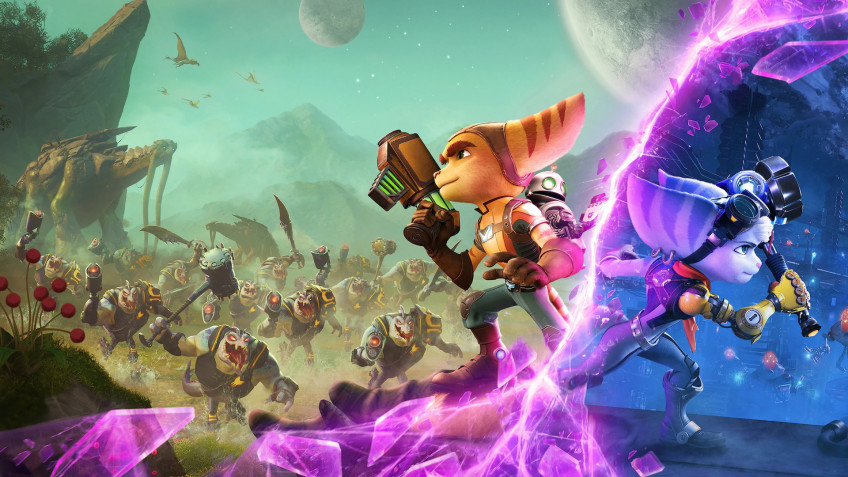 Wherever the fate of the heroic Lombax Ratchet took! And he saved the universe (several times), and traveled in time, and fought with Kratos, and even ended up in a mobile runner, which is not customary to remember in a decent society. But now a truly titanic task has fallen on his shaggy shoulders - to sell the PlayStation 5 to gamers. Not that it was completely impossible, but so far Sony really lacks a clear argument for a very expensive transition to the next generation. Almost all of the starter releases have also appeared on PS4 and other platforms, and more Gran Turismo and God of War have been delayed.
And now, the sledgehammer of expectations inevitably falls on Ratchet & Clank: Through the Worlds - a bright, spectacular, incredibly exciting game. But, it seems, not at all ready to serve as a beacon of change. 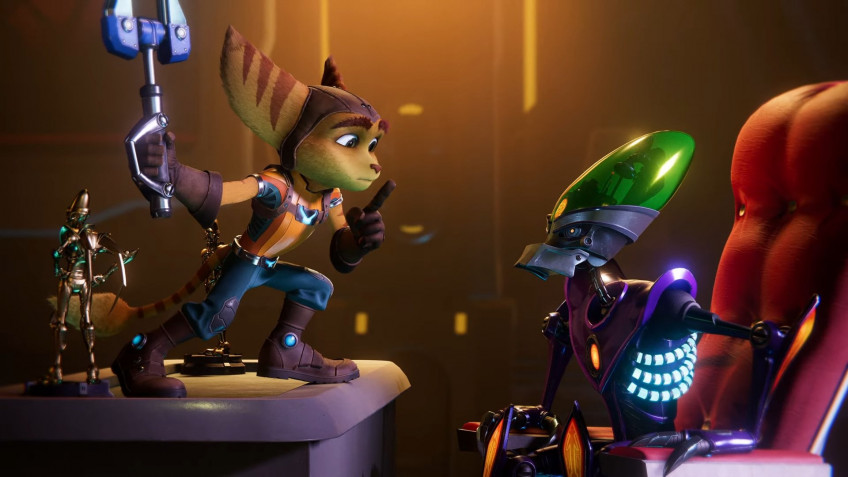 The plot "Through the Worlds" is quite easy to perceive without preliminary preparation, but acquaintance with Ratchet & Clank (2016) will definitely not be superfluous

Actually, this is where "Through the Worlds" begins: on the eve of a big celebration, Ratchet complexed and asks Clank's faithful companion robot if they had gone into circulation. The question, although mischievous (meta-humor has always been a characteristic feature of the series), is not idle. The last time we met the characters was in 2016 when Insomniac Games released a remake of the very first part of the cycle. And although Ratchet & Clank (2016) was generally received warmly, some fans blamed the developers for unnecessarily denying the franchise. Like, the characters became overly cute, and jokes for adults disappeared, and the absurd atmosphere in the spirit of Douglas Adams was muted in favor of an epic space opera modeled on Star Wars.
Insomniac Games listened to all this criticism ... and threw it into outer space. Stylistically, "Through the Worlds" almost does not differ from its predecessor, is not ashamed of its "mimicry" (and sometimes even flaunts it) and, on the whole, suits even younger schoolchildren. Only once, when meeting a giant bone dinosaur, Clank does not hold back his emotions - and that strong word is tactfully drowned out.
At the same time, the plot does not take the restarted universe along a new route, but, on the contrary, returns to the events of the fifth part, Tools of Destruction. There, we recall, it was about the mysterious disappearance of the Lombax race and the powerful device "Measuring", capable of opening portals to parallel worlds. Finally, many years later, Clank repaired the Gauge so that Ratchet could reunite with his kin. But then suddenly (how else?) Doctor Nefarius swooped in, in the ensuing scuffle, the fabric of reality split, and all participants fell into an alternate reality, where Nefarius had long become an all-powerful emperor. In addition, the heroes were not lucky enough to split up, and the wounded Clank was picked up by the lively girl Rivet, an alternative version of Ratchet and a new co-protagonist.
How does the franchise play with such a radical change? She doesn't even notice them. Except for minor animation differences, Ratchet and Rivet are exactly the same in terms of gameplay. They have an identical set of skills, the same characteristics, even a pumping scale - and that one for two. As soon as Ratchet gains access to the jet boots, on the very next mission they, as if by magic, materialize at Rivet.
From a certain point, even the plot ceases to pretend that the split of the tandem de is a great tragedy. Each hero is busy with his own quest and is not particularly eager to reunite, and there Ratchet finds himself a "double" of Clank - a yellow baby archivist nicknamed Keith. But, to the credit of the scriptwriters, they use the castling of heroes to look at old characters in a new way and rummage in their heads. There will be enough neuroses for the whole galaxy: Ratchet is afraid to disappoint his family, Clank blames himself for the incident with the "Measurer", Rivet has become a cynic after many years of struggle with the emperor, and Keith is burdened by the sins of the past.
With the general playful mood of the game, the plot cutscenes keep the drama quite well - only, alas, emotions do not go beyond the cutscenes. The events of the missions themselves almost do not affect the development of the heroes and are built according to the same scheme. Ratchet / Rivet arrives on the planet to find an Important Plot Clue, but before the Clue agrees to cooperate with them, he will have to run around the area and collect resources. As a rule, at this time, some intriguing Chekhov's rifle (a creepy, toothy creature, a giant combat robot, an archive walker, etc.) flashes against the background every now and then, which at the climax shoots out an EXTRAORDINARY plot twist that forces the heroes to look for another solution problems - already on the next planet. 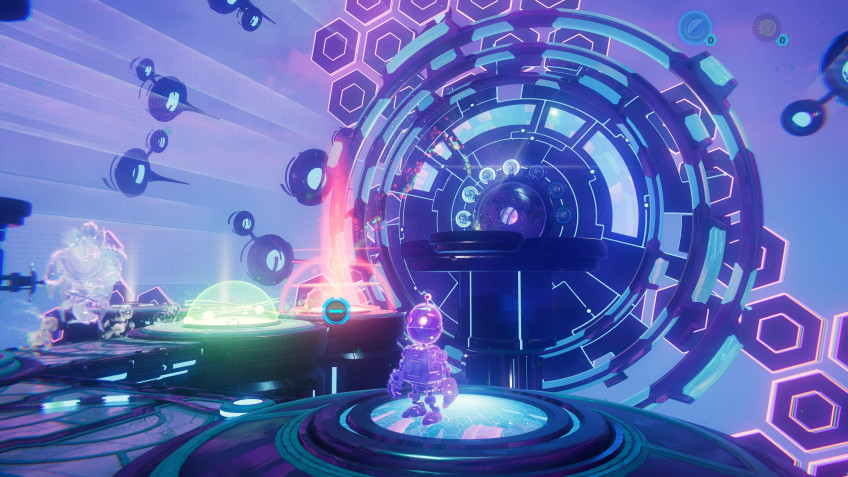 Clank is also sometimes brought to heroism in a special "mental" dimension, solving puzzles and passing a psychotherapy session along the way

However, the plot has never been a priority for Ratchet & Clank: sometimes you just do not have time to be distracted by dialogues, dodging clots of enemy plasma. In this sense, "Through the Worlds" does not drop the bar set by its predecessors for a second. Skirmishes are fast, noisy, and always fun. The main commandment of the franchise - there should always be more weapons than cartridges - the developers have kept intact. In the later stages, ammunition melts in a matter of seconds, and in the course of a single battle, you can easily exchange a dozen different barrels.
Arsenal "Through the Worlds" - a balanced and moderately funny selection of new weapons, old and old-under-new-names. From the fact that the sniper rifle is now called "Bashkol", and not "Plazmoboy", nothing has changed. But new items are often touched by their creativity: "Sprinkler" turns enemies into green sculptures, "Ricochet", in case of a successful hit, continues to bludgeon the target for a few seconds, and the depressed flying mushroom "Mister Antiload" distracts the enemy with hoarse shouts. Compared to Ratchet & Clank (2016), the new game lacks a groovitron and operator, the best gadgets in the history of the series. But for some reason, they left the saw-saw, which was never particularly effective.
The pumping is surprisingly fast: during one mission (that is, in about an hour and a half) it is quite possible to bring your favorite weapons to the maximum level and accumulate resources to buy key upgrades. So it's time to move on to the next! Developers by hook or by crook motivate players to change tactics, even if at first something seems ridiculous. Do not underestimate the well-coordinated attack of "Anti-load" and biting mini-robots "Agents of Doom" on the boss - especially if you turn it into a graceful bush in advance. 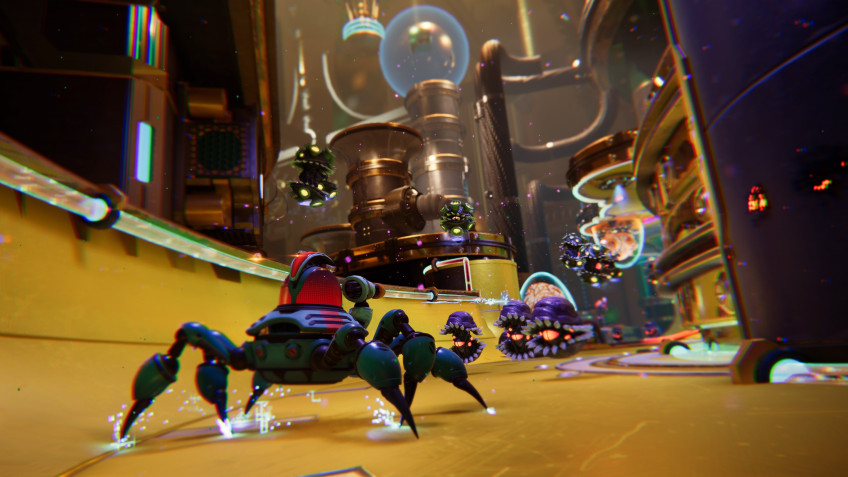 Hacking computers is also designed as a shooter: the antivirus spider "Glitch" with the habits of an anime girl vigorously shoots malicious programs
"Through the worlds", in principle, captivates with its variety, and this is not only about weapons: almost every planet declares a new mechanics or type of enemies. The chase on the roofs of a rainy metropolis is replaced by a race on beetles through toxic swamps, an air battle on a dragon picks up the boarding of a pirate schooner, an insane slalom in the mountains is followed by a gloomy horror level in an abandoned laboratory. Even gladiatorial fights - one of the repeated activities - are designed inventively: each of the stages offers its own tasks and restrictions, and not just increases the number of enemies.
It is all the more strange that the developers have not fully decided where to attach the main conceptual "feature" of the game - the breaking of realities. Here and there in the locations, there are anomalies-teleports, but in fact, they only help you move a little faster in space and get to secret nests. Each interaction with portals is strictly linear: in a different setting, they could easily be replaced by banal doors, stairs, or hooks. No surreal visions like Doctor Strange or dodgy Portal-style mysteries you will not meet here. The motive of parallel dimensions is fully played out in only one, but extremely effective mechanics. At some levels, you can find special crystals, hitting which throws heroes to an alternative version of the same location. A busy laboratory suddenly turns into gloomy, half-sunken catacombs, and a field of space debris - into a mining planet on the verge of a cataclysm. 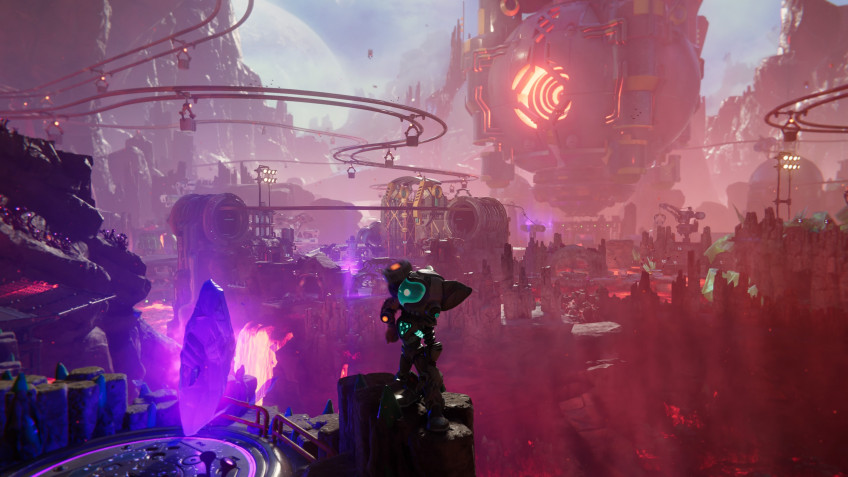 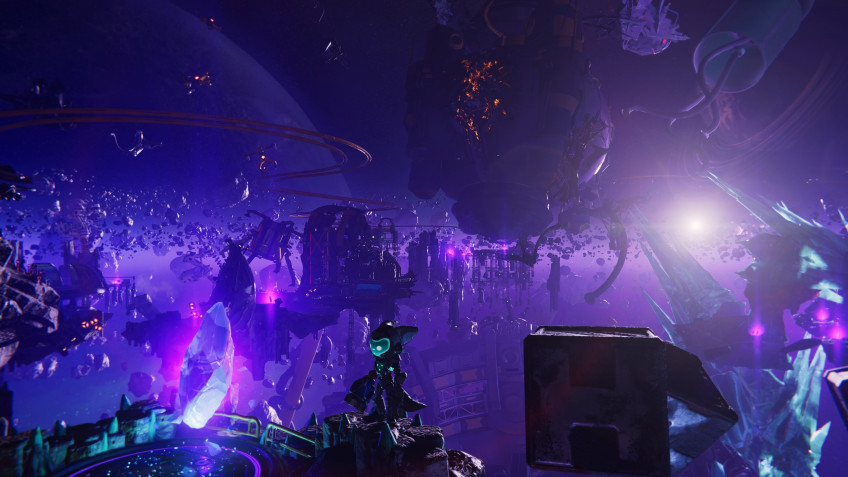 Despite the cartoon style, "Through the Worlds" can be safely called one of the most beautiful games of our time. The skill of the artists is often breathtaking
Perhaps it is at these moments that "Through the Worlds" for the first time truly demonstrates the computing power of the PS5. The instant switching between two huge, strikingly different levels is truly impressive - both visually and in terms of gameplay. And in general, you quickly get used to the lack of regular loads (except for a couple of suspiciously slow elevators). But for a full-fledged next gene, this is still not enough. In the course of the passage, every now and then you catch yourself thinking: was it really all the same thing that could not have been implemented on the PS4? Yes, with some compromises and cuts. Yes, with loads. Yes, without "honest" reflections and ray tracing - since it catches the eye here only on a couple of three planets. In addition, Insomniac Games ate a dog on optimization.
This brings us back to our original question: Is the new Ratchet & Clank worth buying a PlayStation 5 for? In all honesty, no. Is it worth taking "Through the Worlds" if you already have a console? Certainly. This is not a revolution and not a future trendsetter of the genre. You will hardly see anything here that you have not seen in previous games in the series, albeit on a smaller scale. But the main thing is that Insomniac Games has once again turned out to be a dynamic, witty game with charming heroes and extremely picturesque landscapes. Simple enough to appeal to kids - and smart enough to captivate adults. And with revolutions, we will wait until the next part.
Pleased 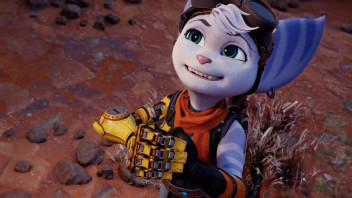 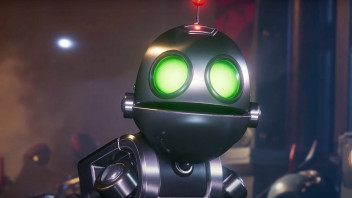 How we played
In what: The key is provided by the publisher.
On what: PS5.
How much: about 22 hours.
Achievement of the editorial office

"When my friends are with me"
Defeat the boss using only support units and immobilizing weapons.
About localization
About localization:
Full dubbing of excellent quality: lively and witty translation with only minor blots. The voice actors are the same as in Ratchet & Clank (2016).
Verdict
« Ratchet & Clank: Through the Worlds" - the long-awaited return of the beloved franchise, which is comparable with the dynamics of the entertainment and the best parts of the cycle. And although the new game clings too tightly to the formula proven over the years, you hardly want to scold it for it. The formula works!