explosive Klee will easily blow any obstacles to dust for you. Do not underestimate her due to her age and small stature, 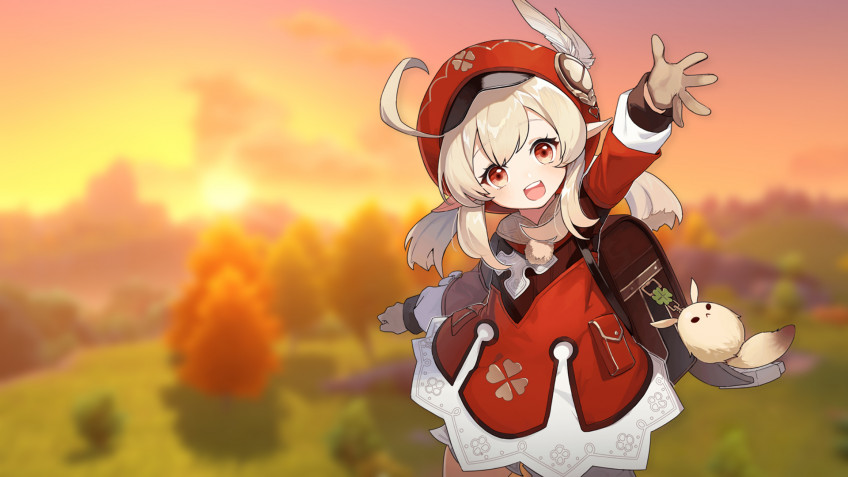 Little Knight Sparkle from the Ordo Favonius, explosive Klee will easily blow any obstacles to dust for you. Do not underestimate her due to her age and small stature, because Klee is one of the best basic damage dealers in the game.

Strengths and weaknesses of Klee

Klee will not play the role of support - she is sharpened to be the main damage dealer, and therefore the priority is to pump basic attacks, and then everything else.

The main attack is Babah!

Normal Attack - Klee throws up to three bombs, dealing area damage to Pyro.
The charged attack is a short spell that deals damage to Pyro in an area, which spends a certain amount of stamina.
Attack in the fall - having accumulated the energy of fire, it rapidly falls to the ground, attacking all enemies on the way. After landing, Pyro deals area damage.

Throws a powerful Jump-Bounce bomb that bounces off surfaces three times and explodes, dealing area damage to Pyro with each bounce.
After the third bounce, the bomb explodes and disintegrates into mines. Mines explode after a while or when they touch enemies. The explosion inflicts area damage on Pyro. Initially has two charges.

Klee burns to the fullest! For the duration of the skill, Klee summons Roar and sparks, which inflict area damage on nearby enemies of Pyro.

The best constellations for Klee

This item is intended for those who are ready to invest money in the game to gain constellations from characters, but Klee shows himself perfectly well without constellations. Neither the first nor the second will bring key changes to the Klee game, although they will add damage. But the fourth and sixth will already be much more useful not only for the heroine herself but also for the whole team - with them, Klee can be used as a "battery" or as a side damager, which will allow not to build a party around her alone.

How to play as Clee 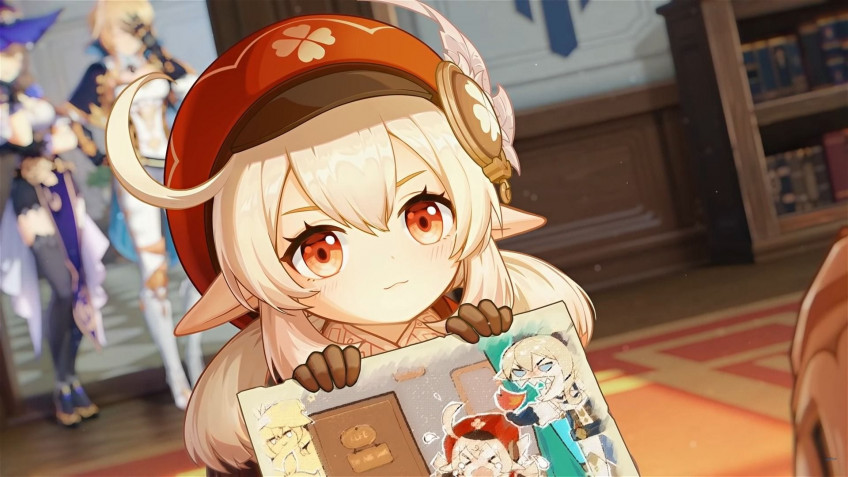 One of the main skills for playing effectively as a Klee is the ability to use the main attack correctly. The first two attacks are fast, but we will skip the third one, it has too long animation. There are several ways to interrupt an animation:
Dealing damage with normal attacks or bombs, Klee has a 50% chance to get an Explosive Spark. She looks like a small four-leaf clover rotating around the character. An explosive spark allows you to "free" (without spending stamina) hit with a charged attack that deals 50% more damage. It is very important to keep an eye on the Explosive Spark: using it will greatly increase your damage per second.
Klee Jump Bomb when it explodes leaves small mines that explode after 15 seconds, or after the second bomb detonates if you threw it. Sucrose, Genie, or Anemo the Traveler can heap these mines together with the enemies and make a big BOOM! If they are not in the group, then we simply drive the enemies through our minefield, while dodging attacks.
And most importantly: never switch to another hero during the effect of the Roar and Spark ultimate, otherwise, it will disappear. Ulta Klee is very effective against single targets and bosses - it shoots six times. But if you have C4, it makes sense to switch to another character after the fifth shot: then Rumble and sparks will explode, causing all enemies around 555% of the damage from the heroine's attack power.

The best weapon for Klee

All of them are suitable for Klee, but each has its own nuances of use.
Prayer to the holy winds will give a lot of crits. chance - this will allow you to collect crit. damage from artifacts. Increases elemental damage every 4 seconds, stacks up to 4 times. The effect disappears when the character dies or leaves the battle.
The dust memory will play well against a shieldman like Zhong Li or Dione. It Will give a lot of attack power, but you have to collect crit. chance and crit. damage on artifacts.
Celestial Atlas - the highest base damage, elemental damage bonus, and a chance to deal additional damage due to the "blessing of clouds" proc. Continues to deal damage after switching to another character.

Dodoko's Stories is a free event book from update 1.6, which is clearly conceived specifically for Klee. But her side stat is attack power, so you will need to gain crit on artifacts. The passive ability gives our normal attacks the ability to increase the damage of charged attacks and hits with charged attacks increase the overall attack power. In short, Dodoko's Stories are perfect for rotating Klee attacks. Minus - a low base attack relative to other four-star books.
The Sun Gem from the Battle Pass is another great option for Klee. A side bonus to the crit chance will allow you to gain crit. damage from artifacts. And the unique passive seems to have been created specifically for the Klee: "Yeshua" or the ultimate increase the damage of the main attacks; and vice versa, the main attacks increase the damage of the ult and "yashiki" - up to 40% for six seconds.
Wanderer's Song - gives a lot of crits. damage, and when switching to Klee, it adds one of three buffs (for attack power, elemental damage, or elemental mastery), all of which are useful to the heroine.
Eye of Consciousness is a below-average basic attack, but this is offset by a very high passive attack power gain. With a 50% chance, it throws an Eye of Consciousness at enemies, which deals good damage and ricochets up to 4 times.
Nautical Chart - good for groups where Klee constantly creates reactions. Will increase elemental mastery, increase elemental damage after reactions. The basic attack is above average and, most importantly, the book is free: it is crafted by a blacksmith.
For beginners, we recommend using Twin Jade: it will give a passive increase to crit. chance, and after defeating the enemy - a bonus to attack strength and running speed.

The best artifacts for Klee

There are some interesting Klee set combinations, but always look at the passive stats of the artifacts first. Sometimes it is more profitable to collect two sets of two pieces with good stats than one set of four pieces that are not very good in terms of stats.
Four pieces of Burning Scarlet Witch will increase Pyro's bonus damage and damage from all elemental reactions. One drawback: long reloading of the "Mishka" will not allow you to fully unleash the potential of the 4x set. The buff for additional Pyro damage from four pieces, even with perfect timing, is summed up a maximum of two times and will periodically disappear, because it hangs for 10 seconds, and the reloading of our two bombs is 20 seconds each. But that doesn't diminish the usefulness of this set in the least.
The Lava Walker set can also play on Klee because it stays on the battlefield for a long time, and the enemies are constantly under the effect of Pyro. The bonus from two pieces is useless, but four pieces will increase all damage done against enemies under the effect of Pyro by 35%.
If we have good stats on only two pieces of the Scarlet Witch and two pieces of the Gladiator, we use them. This will give you + 15% Pyro damage and + 18% attack power. Simple and effective.
A more affordable four-star Gambler set is suitable for novice travelers. It will increase the damage from the "Yeshua", and four pieces will make it possible to roll back its recharge every 15 seconds when you defeat the enemy.
The Ceremony of the Ancient Nobility set is also more or less playable. Two pieces will increase the damage from the ultimate (they can be used in combination with the Gladiator or the Scarlet Witch ), and 4 pieces will increase the attack power by 20% for the entire squad for 12 seconds. True, you will still be playing the Klee almost all this time.
And finally, a set for a build for charged attacks: Wandering Ensemble. It goes well with the Knock Knock passive, who's there? , grants elemental mastery and increases the damage of charged attacks by 35%.
Top bonus stats, in order of priority: 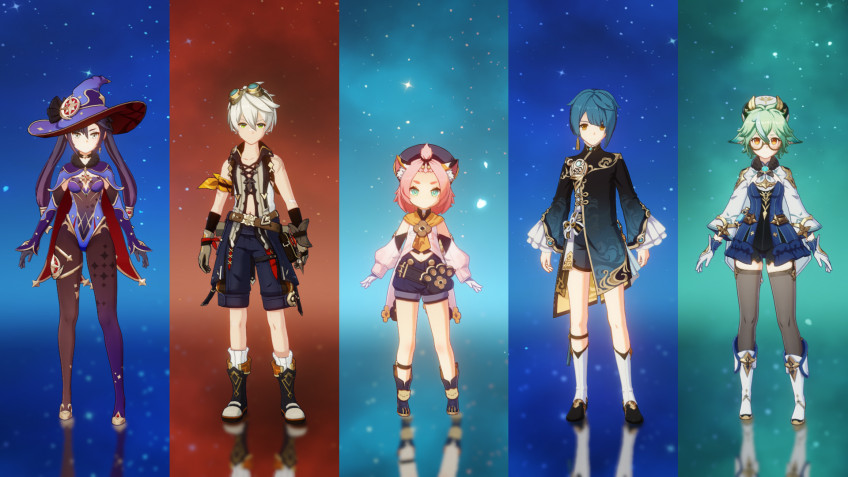 Klee's style of play implies the presence of "pocket" supports in the group. These are the characters who just need to press their skills once and go "into the pocket" until the next recharge of abilities.