Mysterious Fischl, or "Princess of Nirvana of the Night" - a continuous source of Electro reactions, a good "battery" for the team, 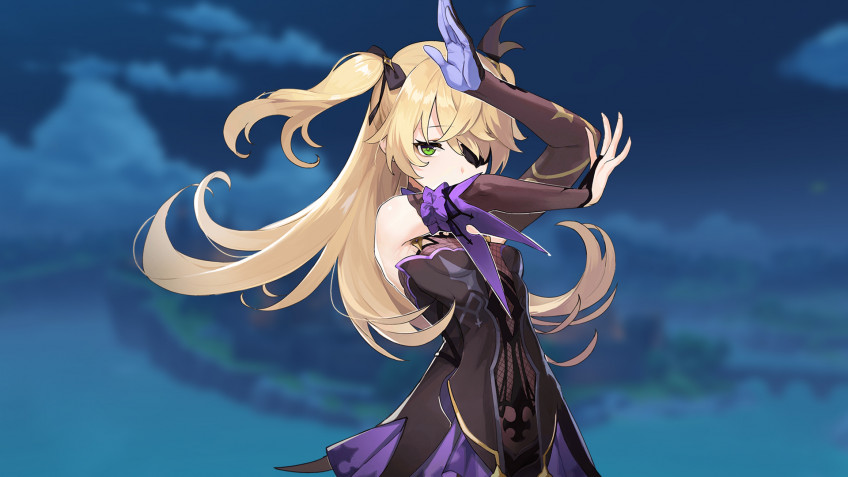 Mysterious Fischl, or "Princess of Nirvana of the Night" - a continuous source of Electro reactions, a good "battery" for the team, and excellent support. But if desired and in the right build, she can become a damage dealer herself.

For the Fish Damager, we prioritize the main attack, for the support - the elemental skill.

Normal Attack: Up to five bow shots.
Charged Attack: A more accurate aimed shot with increased damage. While aiming, the arrowhead is charged with the darkness of the Nirvana of Night. Fully charged with darkness, an arrow deals massive Electro damage.
Falling Attack: Drops to the ground, attacking all enemies in its path. After landing, it deals area damage.

Commands the raven Oz to spread his twilight wings and defend Fischl. While the skill is active:
Do not forget that in the form of a raven you cannot climb walls, but only move at an increased speed. But it is not necessary to fly across the field until the end of the ultimate - you can simply switch to another character, and Oz will remain on the field.

How to play as Fischl 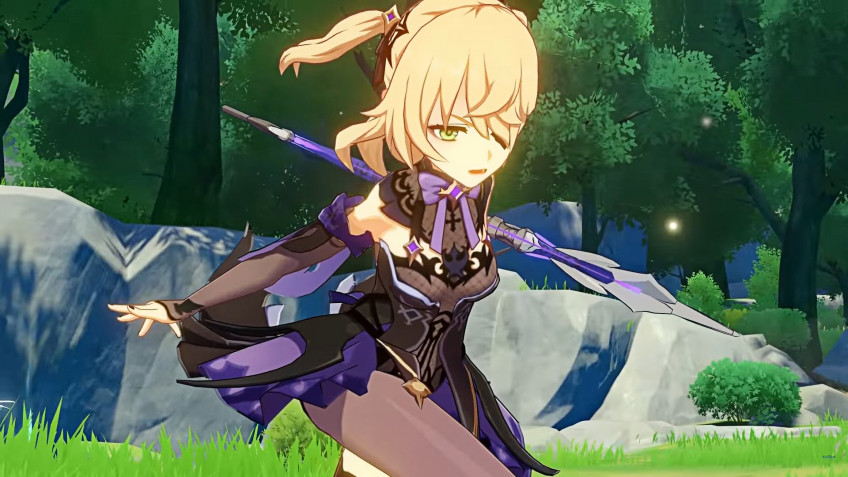 Coordinating the use of Fischl's ultimate and elemental skill is what you need to learn to play as effectively as possible. The more often Oz is present on the battlefield, the more your damage per second will be. Do not forget to change the position of the raven or call him to a new place with the help of E, if the enemy has moved away from the affected area.
If Fischl is the main damage dealer and you constantly attack from a bow, learn to kite enemies. This means that you have to keep your distance while constantly damaging enemies. If you don't shoot, move. Keep in mind that Fischl has one of the lowest defense rates of any character.
After every fifth normal attack, Fischl pauses before firing again. To avoid this, try hitting Aimed and Unloaded Shot for a second after the fifth attack, and then switch back to normal shooting. So instead of a useless pause, you will fire an additional sixth shot, which will generally increase your damage per second. You can also use the dash to disrupt the pause animation and change position to avoid taking damage.
One of the biggest challenges for Fischl is the shields. Even a small wooden shield can be inconvenient, so it is highly advisable to take characters with a two-handed sword and strong elemental reactions with you to a group.

The most powerful constellation Fischl is the last one. Having reached it, Fischl turns into a real monster - both on the battlefield and outside it. With C6, the crow Oz turns into an electric analog of Xing Qiu's ult and deals Electro damage with each hit of the active character, i.e. heroes of other elements will be able to constantly create elemental reactions. Note that all of Fischl's constellations and skills are tied to attack power, which will be the best stat for her on weapons and artifacts.

The best weapon for Fischl

The best bow for both support and damage dealers is Heavenly Wing. Gives a lot of crits. damage and crit. chance, excellent basic attack. Plus passive with a chance to inflict up to 125% physical. damage in a small radius every 2 seconds.

Stringless is one of the best "purple" bows for Fishl support: it adds elemental mastery, which is good for reactions. But its main advantage is that the passive greatly increases the damage of the elemental skill and ult (that is, all Oz's attacks) - and this is exactly what we need from the support of Fischl.
A hunter in the dark (also "purple", but he only appeared in a gun banner for a limited time, but you can't get him from a standard gacha) - a bow with good damage, a bonus to attack power, and a wonderful passive, just suitable for the support Fischl. Increases the character's damage while he is out of the battlefield by 2-4% per second up to 20-40% - that is, Oz will do more and more damage while Fischl is in his pocket.
An ode to anemony - If you managed to get this free bow during the spring event, try giving it to Fischl. This is, in fact, Stringless, but weaker: it also adds mastery of the elements, and also increases attack power after using an elemental skill, but for only 6 seconds.
Prototype: The Crescent is a versatile option for free-to-play players. It is a little inconvenient to proc passive because you need to hit the enemy's weak points, but a significant bonus to attack power will increase the damage of Oz and Fischl as a whole.

The Bow of Amos is another five-star option for the main damage dealer. A lot of attack power and a chic passive bonus to damage, which in many ways compensates for the reduced (in comparison with the Heavenly Wing ) basic attack.
The Battle Pass Green Bow is a great option to add crit. chance and a unique feature will help to gather enemies in a heap using the Cyclone, which occurs every 10 seconds.
Rusty Bow is the best bow for playing through basic attacks (this build is also called "Fischl Machine Gun" because it simply shoots enemies with a cloud of arrows that inflict physical damage). The rusty bow impressively increases damage from a normal attack, but slightly reduces the damage of a charged one - fortunately, the latter "Fischl machine gun" does not really use it.
The compound bow is another option for free-to-play players. A big bonus to physical. damage plus the cumulative increase in speed and attack power from a passive ability. True, the basic attack is below average, but it will do for a crafted bow.

The best artifacts for Fischl

One of the best choices for Fischl in this build is two pieces of Thunderous Roar of Fury and two pieces of Gladiator. What could be simpler: + 15% Electro damage and + 18% attack power. If there are no good "gladiators", in the early stages of the game, you can use two pieces of the "purple" set Gambler: + 20% damage with an elemental skill.
You can also collect a full set of Loud Roar of Fury, with which the damage of the Overload, Charged and Superconductor statuses will increase by 40%, and their application will reduce the cooldown time of the elemental skill by 1 sec. But there is an opinion that the bonus from four pieces is less profitable for Fischl than a simple 18% attack power from the Gladiator.
For beginners who have not yet gotten to the "golden" artifacts, we recommend taking two sets of two pieces: The Temporary Man's Resolve and the Brave's Soul. Both sets will give a total of + 36% attack power.
Top bonus stats, in order of priority:

Four pieces of the Pale Fire set will allow you to get up to + 50% physical. damage and + 18% attack power, which looks like the best option for the main damage dealer Fischl. It will not be difficult to cast the effect of a full set with Oz on the field, because he attacks enemies every second.
Second Embodiment - use two pieces Gladiator and two-piece sets Pale fire or blood Knight (+ 25% and there is physical damage to both.). Do not forget that the effects of sets are secondary - good side stats on the artifacts themselves are much more important.
Top bonus stats, in order of priority:
It is possible that after the processing of elemental reactions in patch 1.6, the priority of stats will change and mastery of the elements will come first.

The best companions for Fischl 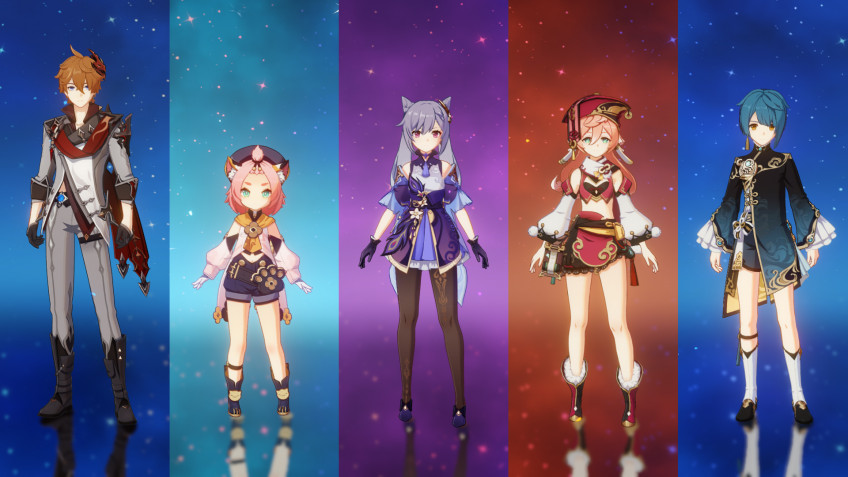