there are projects that unusually skillfully combine the spirit of the "old school" with modern, high-quality game design. 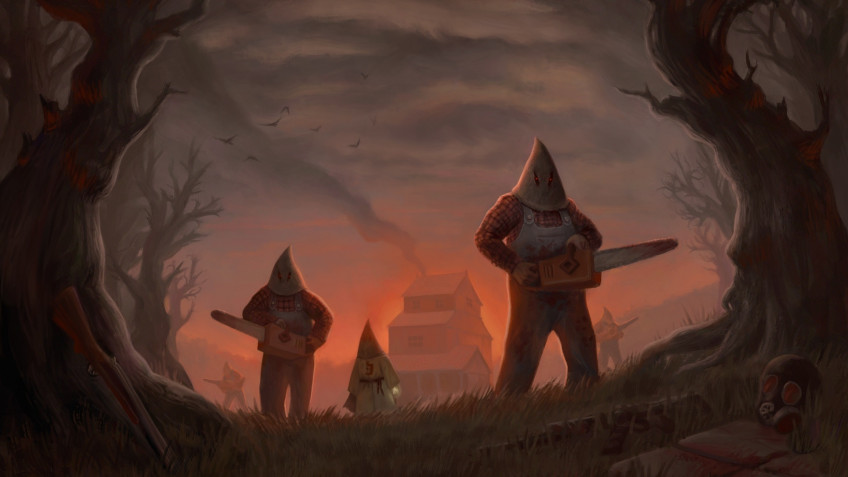 Nostalgia is a hot commodity in the gaming industry, but developers, from large studios to small teams, often use it in a rather brazen way. It is not for nothing that the expression nostalgia bait appeared: the old-fashioned form often only masks the absence of any intelligible content. There is nothing easier than to blame the lack of personal ideas on "loyalty to tradition" - especially in the genre of shooters, which seems to be frozen in time.
But sometimes there are projects that unusually skillfully combine the spirit of the "old school" with modern, high-quality game design. Some shooters are old-fashioned to the bone, which is played fresh and amazes with their ideas. Actually, we will tell about them in today's selection.

Humanity is dead, blood is fuel, hell is overflowing. ULTRAKILL feels like what id Software wanted to do with Doom Eternal but hesitated. This is an incredibly dynamic, violent, insanely stylish action game, the fruit of the forbidden love between Quake and Devil May Cry - Devil May Quake if you will. Without deliberately tricky lore, spreading trees for pumping and labyrinthine levels - just drive, hordes of monsters and aggressive breakcore screaming in headphones.
ULTRAKILL sets the player with two simple goals: to complete all the circles of hell, inspired by the "Divine Comedy"Dante, and destroy its inhabitants in the most sophisticated ways to score more points. You don't need to worry about anything else. Weapons do not need to be reloaded, cartridges are infinite, health is restored automatically - as long as you spill blood and absorb crimson fuel. And there are a lot of clever ways to shed blood in ULTRAKILL: in terms of variety, speed, and depth of mechanics it is not even really comparable with anything - at least if we talk strictly about shooters. You can slide around the arena, shoot demons in a slide, push off walls, jump and dash in the air. Toss a coin with the starting pistol's alternate fire, then fire a railgun salvo at it, so that the beam ricochets through a whole crowd of enemies. "Accelerate" a shot from your own shotgun, literally hitting the shot with your fist, or overload it (by switching the pump several times) to the state of a mini-nuclear warhead and launch a suicidal attack. Every time it seems that the game has already revealed all the cards, you will definitely find some new absurd trick - and you want to re-run the past levels, break old records, and find secrets.
The only frustrating thing is that there is relatively little content in ULTRAKILL right now. The first of three planned acts can be flown in one breath in an hour, and the exit from early access is still scheduled for the end of the year. And even that is not a fact, since only one person is responsible for the development - a solo developer under the nickname Hakita. On the other hand, even one hour in ULTRAKILL gives more emotions than 90% of completed shooters - even independent ones, even large-budget ones.

If Doom of 2016 is often called the "playable heavy metal album", then Amid Evil is a declaration of love for power metal. A fantasy epic in the spirit of Hexen and Heretic, where a legendary hero summoned by the gods must destroy a great evil that has settled in all corners of the world. To pacify the cultists of the Sun and the Moon, expel the parasite that subdued the ancient order of the Guardians, defeat the magicians who summon crystal monsters from another dimension ... In general, perform feats worthy of a rock ballad.
Oddly enough, Amid Evil first of all surprises with its presentation: for a "nostalgic" shooter, it looks amazingly good. The visual range pleases with a riot of colors and evokes associations with the covers of the same power metal albums, and the worlds through which the hero has to go do not cease to fascinate. Majestic temples, sun-drenched ruins of ancient civilizations, sinister sanctuaries hanging in the middle of the void of space, steampunk factories, as if created by the Strongs from Quake 4, - evil in Amid Evil truly has many forms. And the arsenal for dealing with it is no less esoteric. Instead of the usual shotgun - a magic saber, cutting monsters with blades of green energy. The function of a machine gun is performed by a trident that strikes with lightning, and as an alternative to a bazooka - a withered clawed paw that shoots miniature planets. True, there will be no time to admire weapons: battles in Amid Evil are fast and merciless, as befits a genre. Perhaps, unlike other games on the list, it is not that impressive in mechanics, but the dynamics of the gameplay and the entourage of the magical epic make it up with interest.

While Dusk may technically be called an old-fashioned shooter, in reality, it might not be entirely correct. David Szymanski's game is a sincere, carefully considered an homage to the action games of the id Software and Monolith Productions era, an anthology of good old cliches, familiar tropes, and game design tricks of the time. Dusk captures the traits of many of the notable shooters of the late 1990s and early 2000s, from the memorable Doom and Quake to Redneck Rampage, Serious Sam, and the original Half-Life. At the same time, the feeling that the author shamelessly presses on nostalgia for times long gone does not arise at all: the game does not copy its sources of inspiration, but takes their elements and plays up in its own way.
However, the most noticeable influence in Dusk is the legendary Blood.- with a slight touch of the first two Quakes. A treasure seeker in a wide-brimmed hat arrives in a provincial town in search of wealth but discovers only hordes of cultists and the evil spirits they have summoned. We'll have to shoot at demonic goats with two lever shotguns, rush through cornfields from scarecrows armed with double-barreled guns, hunt horned Wendigos with a rifle, drink healing beer, and beat off enemy bullets with sickles ... But then Louisiana Gothic smoothly gives way to industrial landscapes, and then completely disappears into space horror. Dusk does not hide at all what and where she peeped from, therefore, to a sophisticated player who knows the primary sources by heart, she can easily seem secondary - but this absolutely does not interfere with enjoying the process. Responsive controls, great recoil when shooting, a million hidden Easter eggs and secrets,

If you've ever wondered what Quake would have looked like if it had been created in Eastern Europe, then ... firstly, why, and secondly - such a game really exists, albeit in Early Access. HROT, from solo developer Spytihněv, is a muddy brown, depressing shooter set in the backdrop of socialist Prague. The path of Czechoslovakia to a bright communist future turned into a disaster: the country was captured by strange people in gas masks, the cities were flooded with strange creatures. So the main character, the proud owner of the "Ready for Labor and Defense" badge, will have to fulfill his civic duty and personally recapture his homeland from the clutches of the invaders.
It will not be easy to do this: the intricate levels are full of enemies, and resources here are in acute shortage - health will have to be restored by eating canned pig blood and bags of powdered milk. HROT basically plays on the legacy of the Soviet era with a caustic irony that lies somewhere between absurdity, realism, and thermonuclear cranberries. On the streets of Prague, here and there, there are plaques with real propaganda slogans, but in the gym of an abandoned school gallops a revived wooden "goat". The final boss of the first episode of the game is the former President of Czechoslovakia Clement Gottwald on mechanical spider legs, and the episode itself is called Kiss Me Gustav (in honor of the very Gustav who kissed Brezhnev). At the same time, satire does not in the least prevent the game from escalating darkness and the well-known feeling of hopelessness. A dull and monotonous color palette that presses on the eyes, Not everyone will like it, however, it perfectly creates a mood - as well as ambient, similar either to the grinding of metal or to the hum of power lines. The creator of HROT clearly has a creative vision that goes far beyond the usual nostalgia.

Ion Fury is that Duke Nukem Forever, which we did not wait for in due time. The Madmen at 3D Realms and Voidpoint Studios are so committed to their craft that they took and released the game on the Build Engine - an engine almost thirty years ago - in 2019. Yes, on that Build Engine (albeit heavily modified) that once served as the core for the original Duke Nukem 3D, Shadow Warrior, and Blood.
It's scary to think what efforts it cost the developers, but in the end, the end fully justified the means: Ion Fury can rightfully be called the most authentic "old-school" shooter of recent years. This is not an imitation of the classics, but the classics, transformed with the help of modern technologies and several decades of experience. Huge, full of small details and secrets of the location, gorgeous sprite graphics interspersed with voxels, truly (sometimes even too) difficult shootouts, John Saint John as an evil professor, whose cyborgs wreak havoc on the streets of the cyberpunk metropolis. Did you miss the brutal idiocy of movie action movies of the eighties? With senseless explosions, pathos, vanliners, and deliberately bad acting? Hold a three-barreled, eighteen-round revolver, an incendiary submachine gun, and homing bombs, rolling towards the victims like bowling balls. Ion Fury is old-fashioned in everything it needs, but at the same time it feels modern in the right places: in terms of quality, refinement, effort invested. These games just don't get old.